Born to a British Diplomatic family in Beirut Norinka has led a peripatetic life.

She has lived the Lebanon, Syria, Iraq, Chile, Norway, India and Brazil, where she studied art at the Alvares Penteado Art School in São Paulo.

As well as painting and drawing she also studied sculpture, pottery, lithography and engraving.
On her return from Brazil she qualified for a place at Edinburgh Art College but decided to work in London with the renowned British architect at Sir Basil Spence who designed Coventry Cathedral.

While in London she attended life drawing classes at the Slade School of Art.
She won a prize at the annual Royal Overseas League Young Artists Competition.
After her marriage she moved to Brazil where she became very involved with the preservation of the Rainforests.

She became President of the Margaret Mee Society, the SOS Mata Atlantica and also President of the São Paulo Garden Club.
She represented Brazil on two consecutive years at the Chelsea Flower Show in London where she won both a Silver Medal and then a Gold Medal for Brazilian tropical gardens complete with waterfalls and four tons of plant material air freighted in from Brazil.

All the plants – orchids, bromeliads and tropical trees were donated to the Royal Horticultural Society’s gardens at Wisley.
Norinka ran her own flower arranging business in Brazil before returning to the UK where she continues to paint, mainly landscapes, inspired by the beautiful English and Scottish scenery.

Courses of the tutor 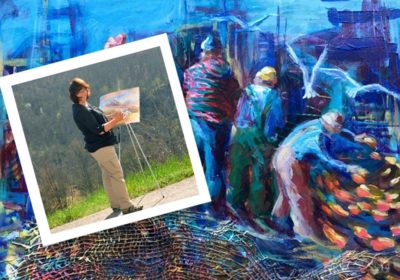